What Are True Potato Seeds? 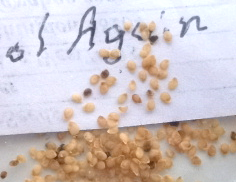 True potato seeds are the seeds harvested from potato fruits. These seeds are also called "botanical potato seed" or "True Potato Seed", or "TPS" to differentiate them from "seed potatoes" which are genetically identical clones produced in large numbers by planting pieces of a potato stem or tuber or through tissue culture.

By planting true potato seeds I am maintaining genetic diversity within my potatoes and I am developing potatoes that thrive on my farm with it's unique growing conditions, pests, soil, climate, and practices. If a new pest or disease appears or there are changes in climate or cultural practices they are unlikely to wipe out the entire population. The practice of planting cloned potatoes from roots is largely responsible for the Irish potato famine of the 1840s, and is how most growers produce potatoes today. Because I trial hundreds of genotypes per year by planting true potato seeds, my land-race potato crop develops horizontal resistance and becomes more acclimated to my farm, and less susceptible to our local pests and diseases. For example, during the 2010 growing season one of my seedlings produced potato tubers that were free of scabs and free of wireworms; the two biggest problems with potatoes in my garden. I look forward to growing this potato and it's offspring in coming years.

How are they grown? 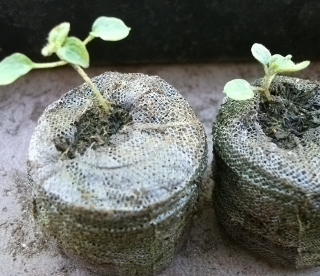 True potato seeds are grown much like tomatoes. I start seeds in the greenhouse 6-8 weeks before the last frost, and transplant them into the garden where they grow and produce tubers just like any other potato plant. No more than 8 weeks should be allowed in order to minimize the chance of tuberization which disrupts the growth pattern of transplants. Due to the delicate nature of their stems, potato seedlings grow best in very bright light (direct sun or close to a grow light).

The way that has worked easiest for me is to plant the potato seeds in a pot in 1/2" soil, and after the first true leaves form (in a month) to cover the stem right up to the leaves. I usually lay the stems down before covering them. Then a few weeks later I add more soil and cover the stem and lower leaves. Repeat as necessary. I plant about 3 to 6 seeds per pot and thin to the most vigorous seedling. After 8 weeks the potatoes are growing in about 2" of soil and are poking out of the soil about 2". Stolons are beginning to form so they need to get into the ground ASAP after 8 weeks. I bury most of the stem when transplanting.

To continuously improve the planting stock I plant tubers from the best plants of the previous year's harvest and allow them to cross-pollinate with the seedlings. (Tubers from about 1/3 of the seedlings are saved for planting next year.) To increase diversity I add new genes to the population on a regular basis. In 2010 and 2011 I am growing seeds that were collected from populations endemic to Argentina, Bolivia, and Chile I am also growing mixed landraces from the Andes, Boliva, and Peru.

Potato fruits look like marble sized green tomatoes. The seeds are collected in the fall. I do not worry about the potato fruits stealing vigor from the tubers, because plants that produce lots of fruit in my garden are vigorous and also produce lots of tubers.

Most modern varieties of potatoes are sterile and do not produce fruits or seeds. If you are fortunate enough to be growing a variety that sets fruits, then you can harvest the fruits and collect seeds, and grow your own unique variety of potatoes. Potato berries grow above ground and look like green cherry tomatoes. The berries do not ripen like tomatoes. They stay green, or might get a slight yellow tint to them. I pick potato berries about the time that they start falling off the plant, or just before my first frost, whichever comes first. Then I allow them to sit around for a few weeks or months until they soften up, or until a few of the berries start to rot. Then I add one cup of berries to 6 cups of water and blend for 30 seconds. The seeds sink. The pulp floats. I dump the pulp off and rinse the seeds several times. Then I ferment them for a few days by adding a pinch of yeast and a spoonful of sugar to the seeds in a jar of water. Then I rinse them a few times and spread out to dry.

The vast majority of cultivated potato varieties do not normally set fruit. This is due to what I believe to be bad choices by plant breeders for many centuries which created a crop that is heavily contaminated by cytoplasmic male sterility and/or other sterility inducing factors. There is no point trying to grow sterile varieties as a seed producing crop. At the end of the 2011 growing season I eliminated from my garden every non-fruitful potato tuber. This destroyed 95% of my potato genome that I have been working on for years. I am still weeping over the loss. I figure that it's a worthwhile tradeoff. Since then I only propagate tubers and seeds that readily blossum and set fruit under conditions normally found in my garden. I don't care how brilliant the tubers are, or how high the yield, or how bug resistant, if a plant doesn't produce an abundance of fruit, for whatever reason, then it isn't allowed to grow a second year in my garden. I do not save seeds or tubers from plants that only produce a few berries.

Other Advantages of True Potato Seeds

One of the best advantages of planting true potato seeds is that I do not have to overwinter potato tubers. I can store many seasons seedstock in a paper envelope, and carry it in my pocket. Even if there is a 100% crop failure or if every tuber spoils in storage the unplanted seeds remain viable and ready to grow.

True seeds are less likely than tubers to transmit disease to the next generation. 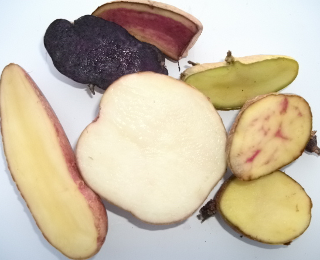 And finally the tubers grown from true potato seeds are not boring, there is a lot of variety in flavor, color, size, and shape.

1- Breed a land-race of potatoes that thrives on my farm, is essentially immune to all our local pests, and that produces both tubers and an abundance of fruits. My potatoes are not currently bothered by Colorado potato beetles. I am still working on immunity to wireworms and scabs.
2- Select a sub-race that may be direct seeded and produce an abundant crop of potatoes. This may involve selecting for larger sized seeds and/or more vigorously growing seedlings. (I have identified one variety of potato seedling which germinates quickly and grows 10 times faster than typical potatoes. This year's task is to keep it alive long enough to reproduce.)

I acknowledge the significant contribution that Tom Wagner of has made to the field of collecting, breeding, and growing true botanical potato seeds, and I am greatful to him for the dozen or so fruiting varieties of true seed that he shared with me to get me started. 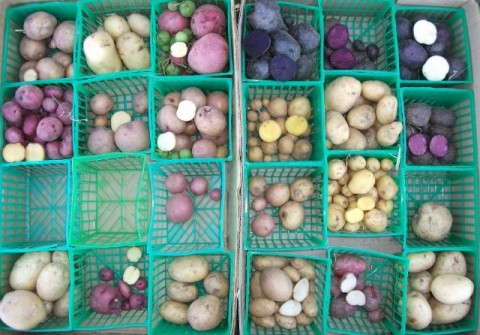 Each pint basket represents the offspring
of one potato seed. If a plant produced
potato fruits (green colored) they are
in the basket with the tubers.
My Other Landraces